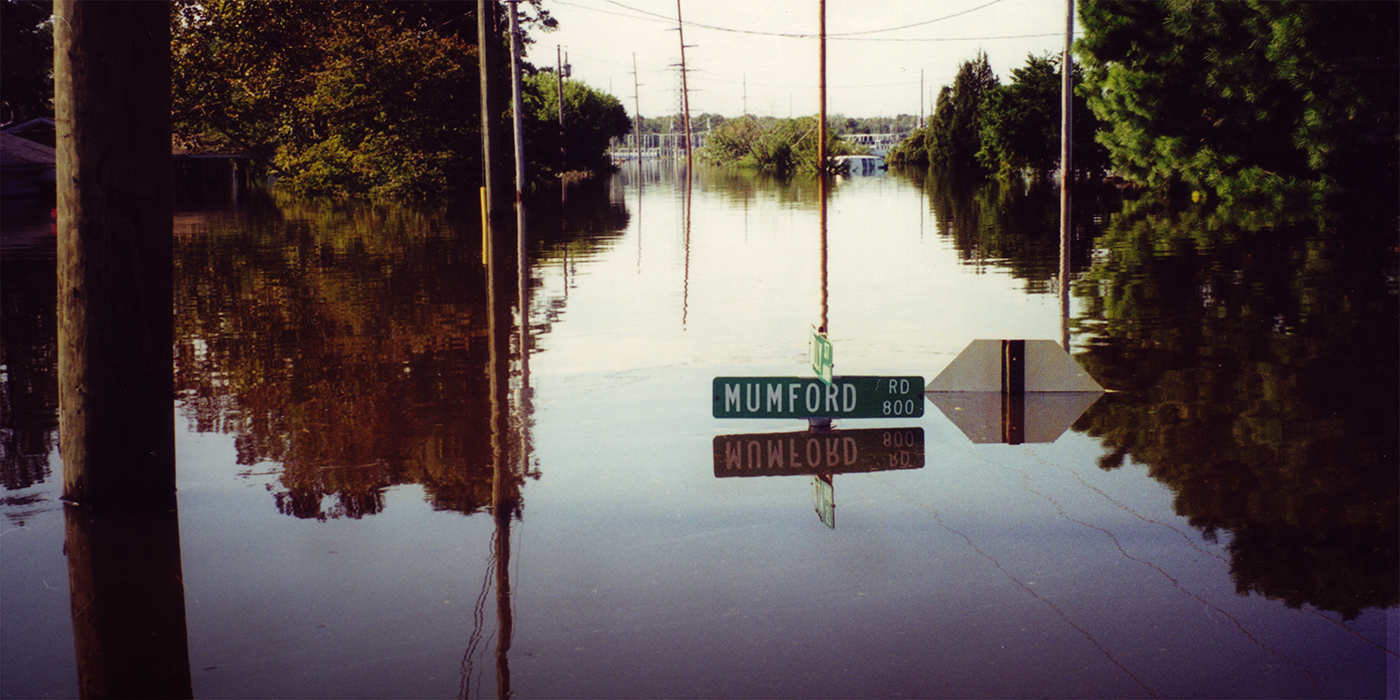 Greenville Utilities’ employees have always been committed to going the extra mile for our customers. But in September 1999, “going the extra mile” took on a whole new meaning during the flooding that followed Hurricane Floyd. GUC’s heroic battle to maintain life-sustaining services to our community is a story of dedication, willpower, endurance, and support from our customers.

The storm hit GUC’s service territory in the predawn hours of September 16th as a category two hurricane. The initial impact was minor, but it dumped between 20 and 30 inches of rain in less than 24 hours, and this came on the heels of Hurricane Dennis a few weeks prior. Between both hurricanes, eastern North Carolina was hit with a half-years’ worth of rain in just a few weeks, creating the worst flooding in 500 years.

For over a week, GUC employees worked around the clock to battle devastating flood waters that threatened our operations. Through it all, employees beat the odds by finding innovative ways to provide utilities for our customers during the “Flood of the Century.”

We encourage you to read the stories below from some of our employees, and to also watch the three-part video series where other employees tell their stories.

“Most of us here at the time were veterans of dealing with hurricanes, so we were pretty in tune with what to do. But it turned out to be something none of us had ever seen. Floyd came in the middle of Wednesday night into Thursday morning, and by Thursday afternoon, it was blue skies. The Operations Center parking lot on Mumford Road was flooded by only a few inches, and we still had no idea how bad it would get.

“By the morning of day three, the water was rising faster than we ever imagined. Later that day, it also became more evident we were in ‘save the plant’ mode at the Water Treatment Plant. Early that evening, our Water Resources Director at the time, Ron Elks, told me to go home and get some sleep to prepare for a later shift. I had laid down for about two hours before Ron called me back in. It was dark at this point and power was out all over Greenville. It was eerie. That started our week-long stay at the Water Plant.

“The river just wouldn’t stop rising. We started marking the walls with permanent marker so we could tell when the flood water stopped rising. For several days, the marks kept disappearing. The Water Plant was an island at this point. It was depressing to see the marks disappear each day and not knowing when it would stop. Helicopters and boats would bring us whatever we needed. We had plenty of sand but not enough employees to make sandbags, so we put out the request for volunteers. People who had boat access came from all over to help. The response from our community was great. Everybody - from employees, other departments, and the community - were willing to step in and help.”

“Sandbags don’t stop water; they just slow it down. So eventually the water came into the plant. Fortunately, we were in the middle of expanding the plant when Floyd hit, so there was contractor equipment on site. We ended up using a large pump from that contractor to pump water out of the pump room around the clock for six to seven days. We had to build a platform for that pump so it wouldn’t get flooded. This was one of the ways we were able to keep the plant running.

“Then it was a matter of figuring out what else we needed to protect. At that time, we only had one small backup generator that could run enough of the plant to keep it going. We assigned this generator to our Construction Engineer Cliff Cahoon. He and the team of people who helped him with this did a great job saving that generator by moving it away from the plant and building a dam around it.

“I could go on and on with other stories of our employees using their experience and creativity to keep our Water Treatment Plant running. If the plant had stopped running, it would have taken weeks to get it fully operational. We couldn’t allow that to happen, and it didn’t.”

“I was a high school student then. While schools were closed during the flooding, I volunteered here at the plant, which is where my dad worked at the time. We rode in on boat from the Memorial Dr. bridge or by helicopter from an area by Allen Rd.”

See more of Brian’s story on the Spotlight Newsfeed.

“GUC employees all came together. Electric, water, sewer, gas, it didn’t matter. Wherever we needed employees, they were there. I used my boat to ferry people from place to place and distributed clean clothes for employees at the plants who had been there for so long.”

“I had only been working at GUC for a little over a month [when Floyd hit]. I can’t tell you the pride I felt having been given the opportunity to work with some of the most awesome people with the biggest hearts, and they were ready to do whatever was needed to make sure others and their own families were safe.”

“I didn’t work at GUC during Floyd, but I was very aware of GUC. We were fortunate to only be without power for about 24 hours, but we were still glued to updates on TV. I remember Mr. Green sharing information about how they were working around the clock to protect our electric system, as well as our water system. We were so grateful to GUC because we knew everyone was doing their absolute best for us under very difficult conditions.”

“I began working at GUC on September 27, 1999. As I drove to the plant that first day and turned onto Old Pactolus Highway, the National Guard was blocking the road, only letting through residents and GUC employees. The guard would not let me through because I didn’t have a GUC badge yet. Luckily, my new coworker pulled up and vouched for me. My supervisor made me a temporary badge by taking a photo of me standing outside the entrance of the plant, laminating it, and somehow putting a GUC logo on it. I still have that makeshift badge today and will probably always keep it. As hectic as things were here during that time, everyone was nice and welcoming, and the team I was a part of was just remarkable.”

“We had the National Guard helicopter delivering sandbags to different GUC locations. I remember one time, we put too many sandbags in their helicopter. The helicopter went up and then it came back down. They said it was too heavy and we had to remove some of the bags.”

“The waters started rising during the night, and I was able to get to the Operations Center by first light the next morning. One of the first things I saw was a small Beagle swimming by Station One. When I retrieved him, he went limp with exhaustion, and I knew if I had not gotten to him, he would have drowned. I’ll also never forget having to mount a jet ski by the airport with a bag of tools to repair a generator at the Water Treatment Plant.”

Video Part 1: In this first part, learn what it was like when employees realized they must abandon the operations center, and what measures have been taken to mitigate another catastrophic flooding of our operations center.

Video Part 2: You may remember the day, 20 years ago, when Greenville went dark following Hurricane Floyd. What you may not know was the intensity of the battle to keep the lights on despite the odds. Watch the heroic story of how GUC employees fought to save Greenville's electric point of delivery substation, and what has been done since to ensure the lights don't go out again.

Video Part 3: During the “Flood of the Century,” GUC employees worked tirelessly to provide quality drinking water and continue treating wastewater. In the final video of our three-part series, experience the stories of how employees fought mother nature and never gave up; see what has been done to keep our plants operational in the event of another catastrophic flood.