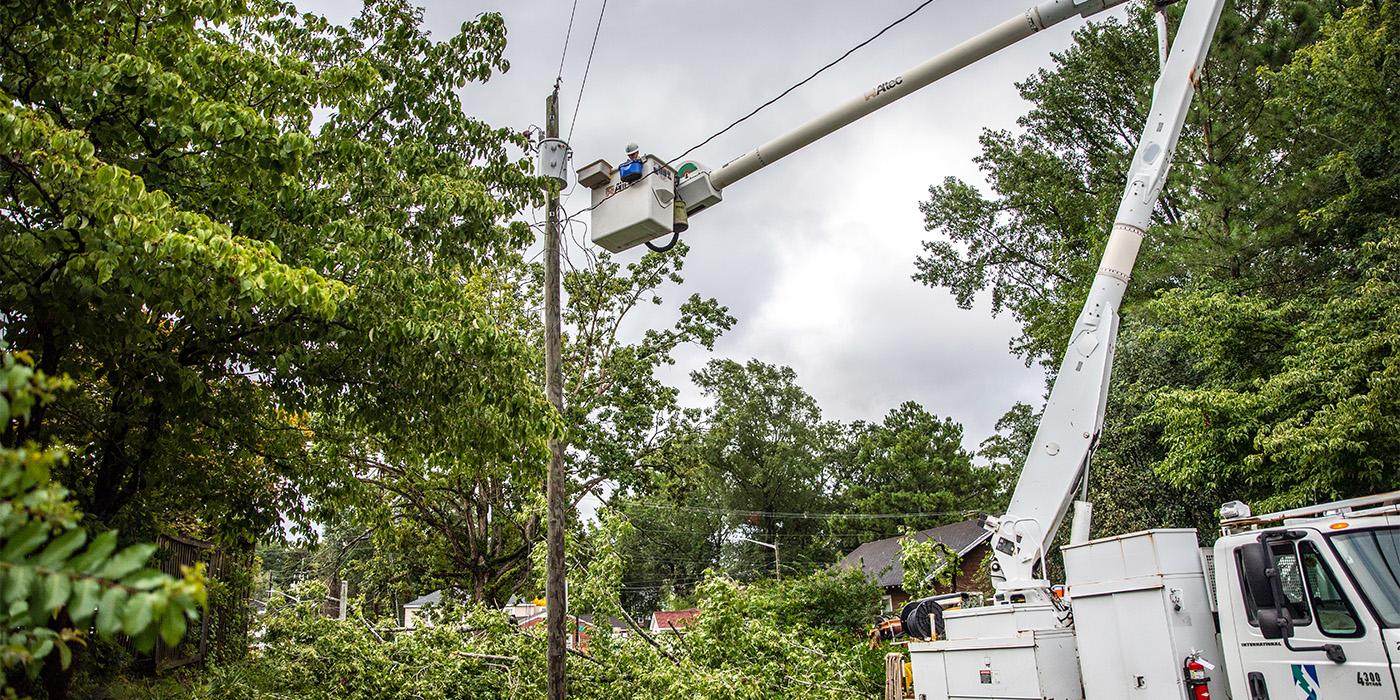 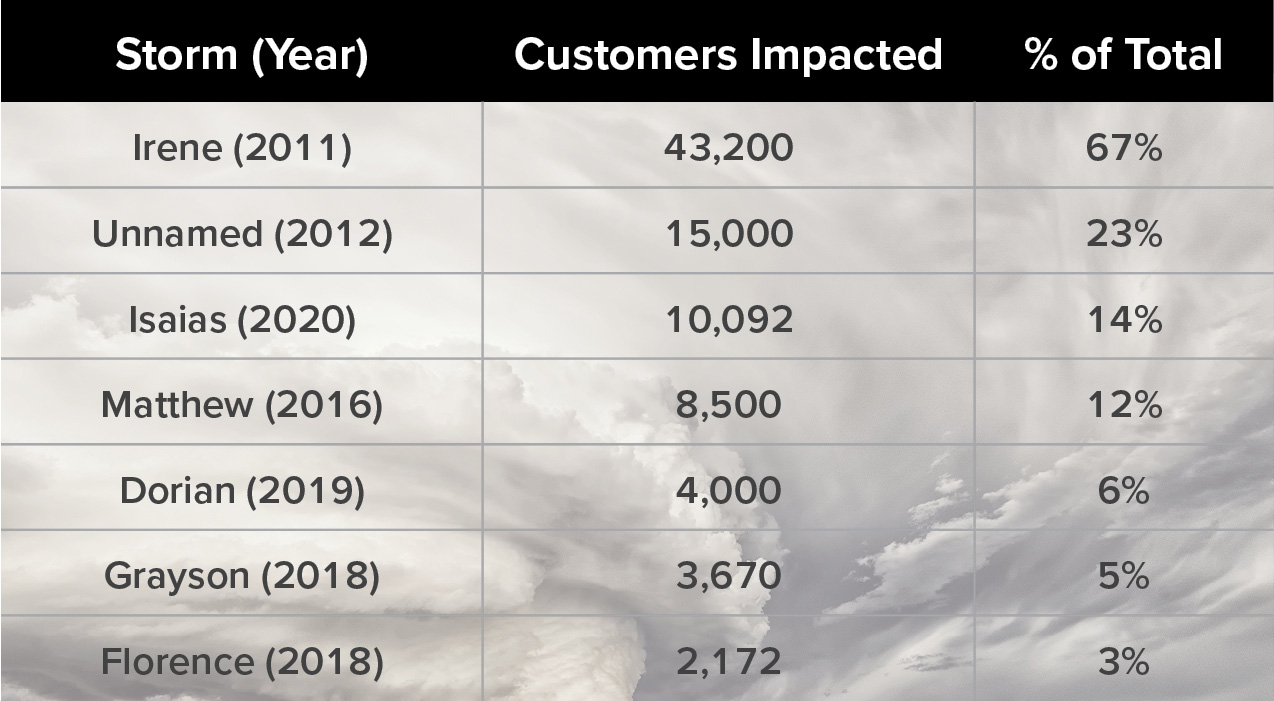 At first predicted to be a low-key, daytime tropical storm for the Carolinas, Isaias became a hurricane just before making landfall on our state’s southern coast under the cloak of night. While it was fast-moving and downgraded to a tropical storm before hitting GUC’s service area, it still packed a punch not easy for us to forget.

Before making it to North Carolina, Isaias had already broken an old record by becoming the ninth named storm to form in the Atlantic before the end of July. The storm made landfall at 11:10 p.m. on August 3rd as a Category 1 hurricane near Ocean Isle Beach, with maximum sustained winds of 85 mph. As it moved north at a speed of 28 mph, it battered the eastern part of our state with high winds, storm surge flooding, heavy rain, and isolated tornados. In less than 24 hours, Isaias left a trail of damage, fatalities, and millions of power outages from the Carolinas to Maine.

With Isaias predicted to bring high winds to our service area, GUC began preparing for Isaias days ahead of impact. Preparations included stocking trucks and trailers with extra supplies, filling gas tanks, and securing contract crews to be on standby, to name a few.

On the morning of Monday, August 3rd, it became clear that eastern North Carolina would be impacted. At 6:00 p.m. GUC’s Emergency Operations Center (EOC) was activated, and the call was made to delay opening our drive-thru lanes and offices until noon on August 4th. Normally, our Operations Center on Mumford Road becomes the EOC as our base of operations during storms, staffed around the clock throughout the event. However, due to the pandemic, our Call Center and Public Information staff remained at the Main Office (spread out on all three floors) while Dispatchers and the Storm Logistics Team remained at the Operations Center.

The first outages began around 12:15 a.m. on Tuesday, August 4th, and were small. The first big outage, affecting 713 customers, happened at 2:20 a.m. when a vehicle hit a pad mount transformer near Memorial Drive and Arlington Boulevard.

Shortly after 3:00 a.m., the eye of the storm, which was 35 miles wide, brushed passed Pitt County, bringing with it tropical storm force winds. The Pitt-Greenville Regional Airport reported max gusts of 54 mph. As the eye of the storm passed by, GUC power outages began to increase. By 7:00 a.m., 12 of our electric circuits were down, leaving 10,092 customers without power - marking the peak of our power outages.

Electric crews worked throughout the night of August 3rd and into the morning of August 4th, when it was safe, assessing damage and clearing lines and roads. Isaias began moving out of our service area at dawn, and crews went out in full force to restore power, including contract crews with River City Construction.

Crews were spread out over Pitt County making repairs to the electric system. In all, they replaced 21 poles and 16 transformers. To speed up restoration while also following pandemic safety guidelines from the Centers for Disease Control, our Storm Logistics Team - made up of 16 employees from Human Resources, Gas, Water, and Finance – delivered extra supplies and food to crews out in the field. This helped eliminate large gatherings as well as the need for crews to return to the Operations Center on Mumford Road for supplies, meals, and snacks.

“We had materials loaded in trailers so that a driver could leave Operations within minutes of receiving a request,” said Teresa Wall, HRIS Analyst and Storm Logistics Team Lead. “The logistical changes we made for this storm were smoother and allowed Logistics to provide a timely service to Electric crews.”

The storm also affected our Gas Department with one incident. Just before the eye of the storm brushed Pitt County, 911 called GUC to report that an uprooted tree had caused a gas service line to break near 14th Street and Firetower Road. Gas crews responded at 3:24 a.m. and capped the service line. The crew coordinated repairs with the customer and had the line repaired the following afternoon.

Communicating with our customers throughout storm events is crucial to maintaining the high level of service they deserve and are used to receiving. It takes a team of employees from Customer Relations, Public Information, and Operations to communicate between Operations and customers.

From the time our Call Center was set up at 8:00 p.m. on August 3rd, until 10:30 p.m. on August 4th, the Call Center received 2,196 calls and communicated with 641 customers through our website chat. To put this in perspective, on a typical Tuesday they receive an average of 700 calls and 40 web chats.

Many of our customers also reported outages using the online reporting tool. Social media played a big role during Isaias, offering two-way communications for both GUC and customers. Facebook and Twitter were heavy with questions, outage reporting, and words of encouragement throughout the event (see “Thank Yous” on page 2 for a snapshot of storm appreciation from customers).

As the NC Climate Office stated in its blog about the storm, “while Isaias may have been a small, fast-moving storm, it was far from a fly-by-night operation.” They go on to write, “from the southern coast battered by its high winds and surge, to isolated stream and river flooding, to the sadly fatal toll of its tornadoes -- its impacts are enough to stand out even among an otherwise storm-ridden two-year span in North Carolina.”

And for Greenville Utilities, Isaias stands among the top three most damaging storms in the past decade based on electric outages (see sidebar). That’s no small feat considering the mighty storms that our employees and operations have overcome in recent history. 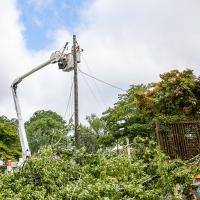 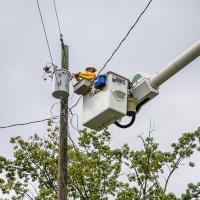 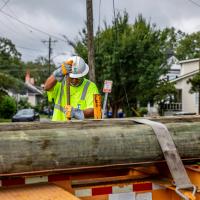 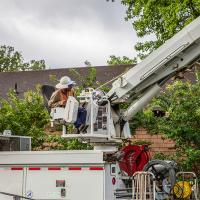 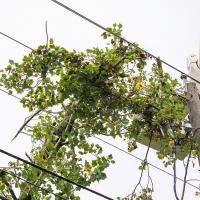