Turning river water into drinking water is quite a task - with a lot of steps. It all begins with bringing water from the Tar River into the Water Treatment Plant's (WTP's) pre-settling impoundment area. The untreated water settles in this area for six days while heavy solids sink to the bottom. But over time, sediments accumulate in the impoundment and must be removed by dredging.

In March, GUC contracted with Groh Dredging and Marine Construction to begin the month-long process of cleaning out the impoundment. Step one was to drain all but several feet of water from the area. Similar to vacuuming a floor, a machine on top of a floating dock-like structure moves slowly across the remaining water, pulling sediment from the bottom and out through a series of hoses.

"We estimated two to five feet of sediment on the bottom," said WTP Superintendent Julius Patrick. "After draining several feet of water from the impoundment, we discovered sediment near the influent up to 20 feet in depth."

Staff began refilling the impoundment on April 29th, and it was put back into service on May 8th. Julius said that prior to the cleanout, the turbidity (cloudiness) of the water in the impoundment fluctuated between values that were sometimes higher than the Tar River to values that were 50% lower than the river's turbidity. These wide swings were caused by the accumulation of sediment.

"Now," said Julius, "the turbidity of the water entering the plant from the impoundment is consistently around 30% lower than when it came in from the river. Once the rainy season tapers off, we should also see a drop in the use of chemicals needed to treat the water."

Julius and his staff have purchased a portable monitoring device and installed multiple sample lines in the impoundment that allow staff to monitor several water quality parameters at several depths. Having this new monitoring device will help them plan appropriately for future cleanouts.

Shortly after the pre-settling impoundment went back into service, WTP contracted with divers to clean the intake screens in the Tar River. Sediment and debris also accumulates on the screens over time, and must be periodically cleaned. 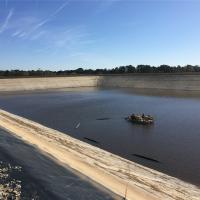 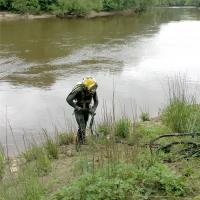 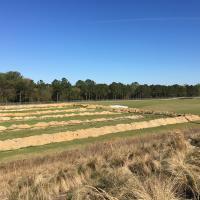